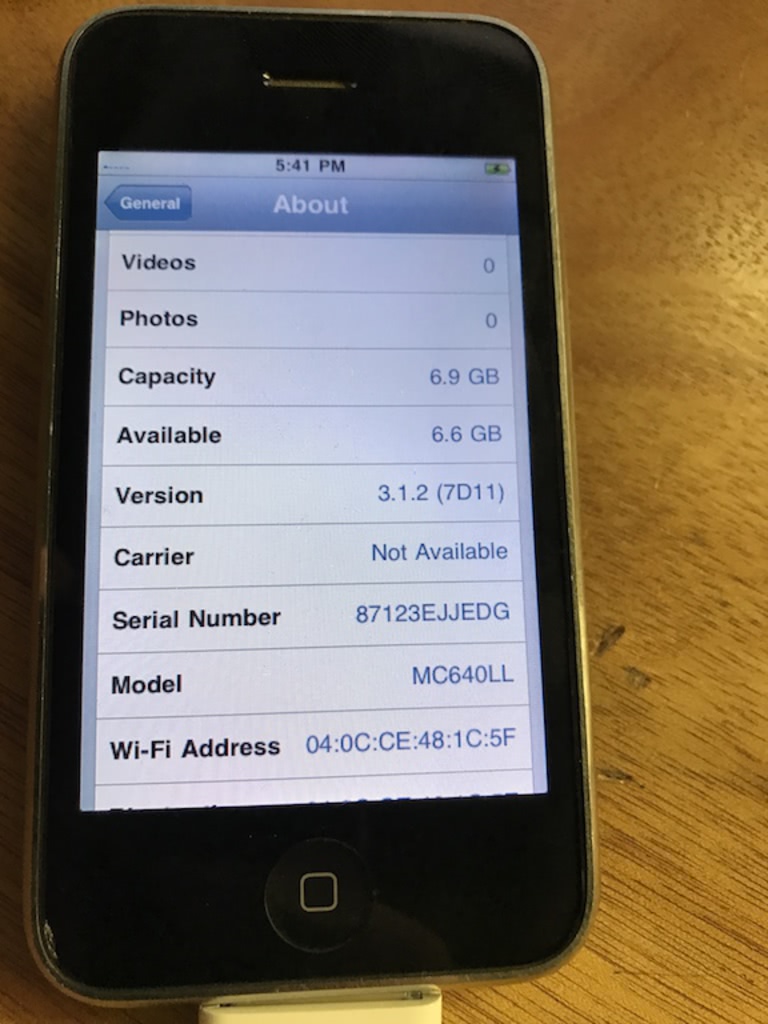 See that? That is an iPhone 3G[s] running 3.1.2. What makes this special is that this is a new boot ROM 3G[s] thats been downgraded. And, for the cherry on top, its an iPhone that shipped with iOS 5 originally. How did I do it?

Just recently, a person on Twitter called ‘axi0mX’ released the alloc8 boot ROM exploit affecting the new and old boot ROM 3G[s], though he recommends that the 24k exploit still be used on old boot ROM devices due to a slow down that the alloc8 exploit introduces. Thankfully, this exploit is relatively easy to use, if you have the right tools

(updated 4-12-2017) Time to install all the dependancies. Open Terminal, then install pip/Python from Homebrew like this:

Next, install libusb, similar to how you installed Python, using Homebrew:

Quit Terminal and then reopen Terminal.

Navigate to a nice and safe directory in Terminal, e.g. cd ~/Desktop. There, clone the ipwndfu repository:

Thanks to some oddities in libusb for El Capitan and Sierra, it is necessary to patch the binary we use. Only do this on El Capitan and Sierra. Thankfully, axi0mX has made it pretty easy for us. Verify that the version installed on your computer is the same one the patch is made for (1.0.21) by running this command:

Now, its time to patch. inside the ipwndfu directory, run

Now, just to make sure that the patch was applied successfully, rerun this command:

Now, it is time to generate a custom IPSW for your 3G[s]. Below is a table which breaks down the versions and tools to accomplish this.

During the process, redsn0w will ask you something along the lines of ‘Will this custom IPSW be used on a newer (fixed) version of the iPhone3GS?’. You must answer ‘no’ to create an IPSW laced with the 24Kpwn exploit, which is essential for alloc8.

All the tools above will walk you through the IPSW creation, just don’t stray too far from the default options and you should be fine. I opted for 3.1.2, but thats my personal choice. I also downloaded my firmware file from ipsw.me. Also, since we’re on the topic of downloading firmwares, you also need to download the 4.3.5 IPSW for your 3G[s] and place it in your ipwndfu folder

From there (again in your ipwndfu folder) run:

You should be all set to run ipwndfu here pretty soon.

Note: if you installed all the pip dependancies with the Homebrew version, you must prepend python to the commands like I have done below

Okay, here is where it got dodgy for me. The developer recommends you either use a computer with iTunes 11.1 or older, or use idevicerestore to restore the custom firmware file to your 3G[s]. I tried getting idevicerestore to work, I compiled all what I needed, but it kept getting stuck. I gave up and just grabbed my trusty 17” PowerBook running 10.5.8 with iTunes 10. It took me twice to get it to work, but I’m writing this from the perspective of me restoring it with iTunes.

I went ahead and transferred the custom IPSW to the machine, ready for restore. I had iTunes opened, raring to go.

Now, iTunes should popup complaining about a device in recovery.

Go back to Terminal, and inside of the ipwndfu tools directory, run:

Unplug the device, and quickly move it to the machine with iTunes <11.1, in my case, my PowerBook. iTunes should once again popup about a device in recovery. Now we’re rolling. Okay, deep breath. I’m assuming your iPhone is backed up if you care. Now we need to browse to our custom firmware. Hold down Shift (for Windows) or Alt/option (for Mac) and a file dialog should come up. Browse and select our custom firmware. The restoration process should begin. I had to do this process twice, not sure why, but when I finished, it showed no errors.

After your restore is complete, you should be at a black screen. Move the phone to the machine with the tools once again. Next, we’re running the same command as earlier to get it into a pwned DFU state:

Which, in turn, should provide an output like this:

The whole process should take about 10 seconds, and your screen on your iPhone should be green for a considerable amount of that time.

Hopefully your phone should be booting whatever iOS you chose! Comment below if something bad happens or you discover another way to restore!

If you are having issues running this command, check out Troubleshooting below.

I had some friends try running the guide themselves, and they ran into some issues not covered. 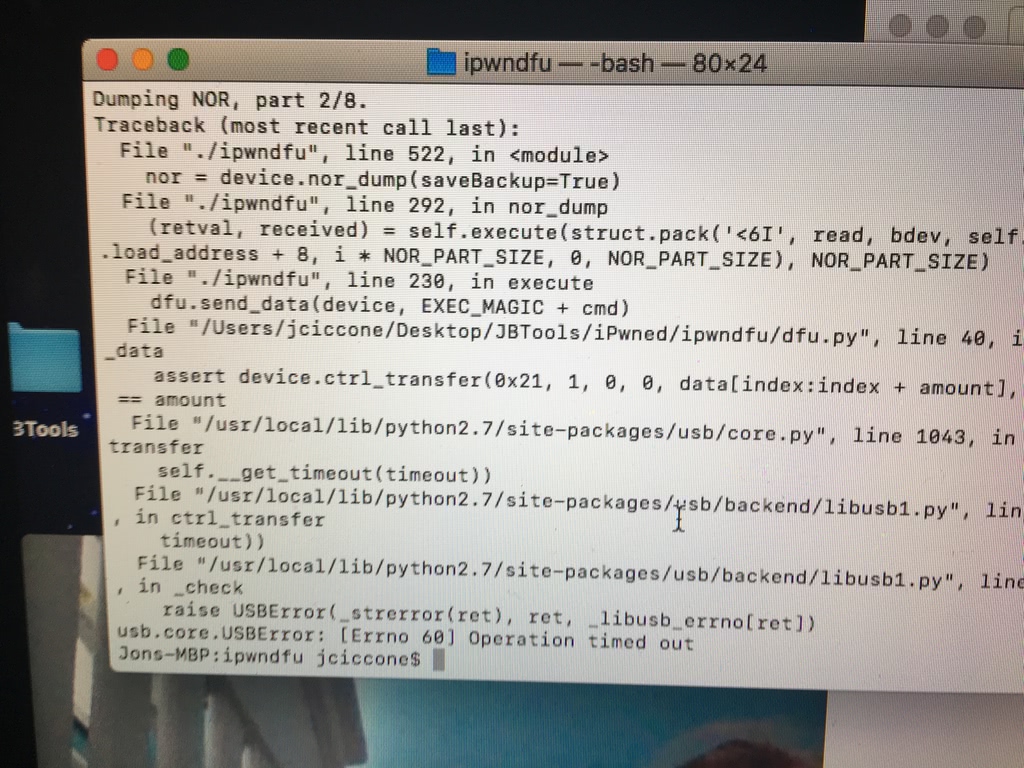 My friend on Slack ran into this. Not sure if it is an environment issue, as I did not have Python installed via Homebrew. I just had OS X’s default install. If you’re wondering if you are using Homebrew Python, run this command:

I added this to the guide, but I think it has something to do with the lack of OpenSSL in the default Python package. Running this in Terminal should fix that:

Thanks to this GitHub issue.

However, if you don’t want to really mess with Homebrew, or the proposed fix doesn’t work for you, here is another way.

Then, close Terminal and reopen.

In Terminal, navigate somewhere safe, like cd ~/Desktop, and run:

Make sure you’ve installed libusb, and then install pyusb like this:

Hopefully that should get you running again.

I’d like to give a major thanks to the developer for writing really good documentation in the first place, and another thanks for creating this awesome open source jailbreak and boot ROM exploit for a device almost 9 years old.

1 there is a bug that the author hasn’t made progress fixing in versions older than OS X 10.9

It is possible, but the developer hasn’t moved to create anything for Windows users.

John, I need to update this guide, but it appears the patches aren’t necessary anymore. They were removed in this commit: https://github.com/axi0mX/ipwndfu/commit/220b8f307debe39099fded4e3ce979d3b1620e0d, I will test when I get a chance. Thanks.